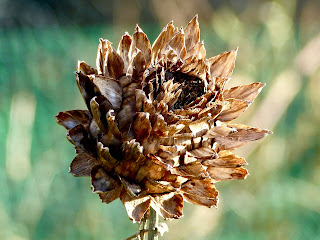 The picture at the top shows an artichoke seed head, on Monday 1st January 2018, at 14:24, School Road Allotments, Hythe, Hampshire.

To read about Hythe, Hampshire, click on the link below:-
https://en.wikipedia.org/wiki/Hythe,_Hampshire
Posted by susan vale at 15:59 No comments: 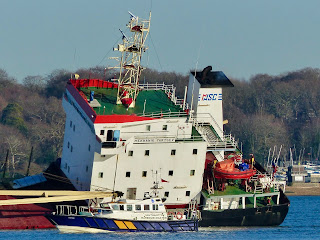 When Russian cargo ship Mekhanik Yartsev lost a load of her timber consignment during stormy weather, en route from Latvia to Northern Ireland, she developed a significant list and headed for shelter in the Solent. Early on Tuesday 26th December 2017, HM Coastguard reported the 13 onboard crew safe and well, the ship stable and maintaining power, but the continuing stormy weather would delay her move to safety in the Port of Southampton. Two days later, on Thursday 28th, conditions improved and the ship was escorted to port, accompanied by a pilot, two tugs, the Harbour Master and an RNLI lifeboat.

The picture at the top shows a close-up of the storm-stricken & listing ship, and the Harbour Master, in Southampton Water, Hampshire, on Thursday 28th December 2017 at 12:43, heading to the port.

To read about The Port of Southampton, Hampshire, click on the link below:-
https://en.wikipedia.org/wiki/Port_of_Southampton
Posted by susan vale at 17:00 No comments: 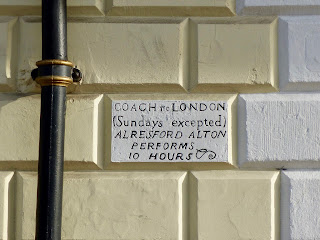 The picture at the top shows an old coaching Inn sign (The Star Hotel), Southampton, Hampshire, on Saturday 9th December 2017 at 12:14.

To read the history of The Star Hotel (old coaching inn), Southampton, Hampshire, click on the link below:-
http://sotonopedia.wikidot.com/page-browse:star-hotel
Posted by susan vale at 16:25 No comments: