It was gloriously wet early this morning and as I looked out across the bay I saw a flock of some 20 or so godwits, drilling for worms on the foreshore as the tide came in. I don't know if they were bar-tailed godwits, or black-tailed godwits; it was impossible to tell from a distance, with a bird-spotting book in one hand and a pair of binoculars in the other, and it didn't really matter, it was just wonderful to see them there.
Posted by susan vale at 15:27 No comments:

On my morning run around the marina, I often see a group of women walkers; sometimes they are gathering at their meeting place by the fountain, sometimes they are stepping out, but always they are busy chattering. They look so relaxed and at ease with each other - it looks so nice and I feel slightly envious and wish I had the knack of joining in (not with this group of walkers in particular, you understand, but in general - having the ability to join in). I'm not very good in a group - I don't feel comfortable; I either want to be in charge (not popular), or skulk in the background (too sad), both of which could get me universally disliked (not at all my aim), so generally I keep myself to myself. This leads me to wonder if the group of women walkers look back at me and wish they had the knack of going it alone - do the joiners find their own company uncomfortable?
Posted by susan vale at 10:58 No comments:

The View From My Window 3. 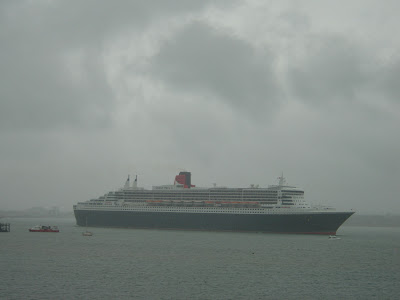 As the day progresses, the weather is really closing in, the rain is lashing down, the wind is blowing (an easterly) and as I look out across Southampton Water I can see Queen Mary 2 looking magnificent in the murk. She arrived from New York early this morning and this evening she is bound for Stavanger. Yes, she did blow her whistle as she pulled away and, no, I didn't wave from my balcony, I waved from inside, but I did go out to take this picture and, yes, I did get wet but I didn't mind at all.
Posted by susan vale at 18:29 No comments:

The melancholy mood continues and I find myself drawn to the music of Purcell (Music for the Funeral of Queen Mary 1662-1694) and Tallis (Lamentations of Jeremiah). Despite the titles, I find these works consoling, healing and, ultimately, uplifting. I think it has something to do with the solemnity, the stillness, the purity of the voices - it resonates with me at a very deep level and helps to soothe my soul.
Posted by susan vale at 15:14 No comments:

I'm in a melancholy mood today and a trip through the New Forest this morning seemed to echo my feelings exactly. It's a sombre day, a light drizzle, mist hanging in the trees; at sea level, I feel this is the closest I can get to walking in the clouds. I love a damp day, and this quiet, closed-in atmosphere seems to reassure and comfort my heavy heart; the dense dark greens of the forest trees, a splash of colour, a buttercup, a clump of daisies, the landscape rolling into the sky. I feel at one with the world.
Posted by susan vale at 12:06 No comments:

Each morning a heron flies over my house. Sometimes there's just one, sometimes two, and this morning there were three. It's usually around 07:20 when I spot them in the distance, but this morning they were an hour later - who knows why? I don't know where they fly from, or where they fly to, and I never see them making the reverse journey, but I do so love to watch them. They cut such graceful figures in the air and are unmistakable as they languidly beat their broad wings; high in the sky over Southampton Water, by the marina, across the pier, closer, towards me, long legs trailing behind, over the house and gone.
Posted by susan vale at 16:36 No comments:

The View From My Window 2. 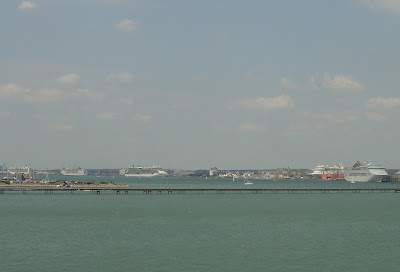 As I look out across Southampton Water this morning, I can see five cruise ships, so it's a very special day and a bumper weekend - three ships yesterday, five today and two tomorrow. It's a hazy day, as you can see from the photo and I had to take a long shot to get all five ships in, but you can just about see them - from left to right they are:- Grand Princess, MSC Opera, Celebrity Eclipse, Azura and Oceana. They arrived early this morning; Celebrity Eclipse was already in dock when I looked out at 05:25 (!), Grand Princess, Azura and Oceana arrived between 06:00 and 07:00, and MSC Opera arrived as I was half way around the marina on my morning run at 07:30.
Grand Princess is bound for Las Palmas, MSC Opera for Amsterdam, Celebrity Eclipse for Gibraltar, Azura for Oslo and Oceana for St Peter Port in Guernsey. As usual, I'll be watching and waving from my balcony when they leave this evening and with so many ships in port, they're sure to blow on their whistles - I do hope so, it's such a wonderful sound. All three ships blew their whistles when they left yesterday, it was electrifying!
Posted by susan vale at 17:26 No comments:

The View From My Window 1. 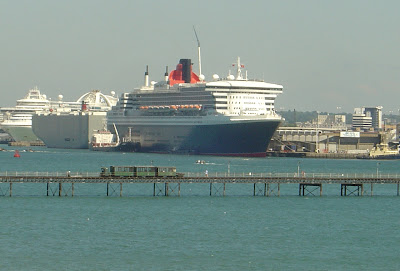 It's always a special day when there are cruise ships in port and as I look out across Southampton Water this morning I can see three - Queen Mary 2, Crown Princess and Oriana. In the photo, you can see QM2 (with the red & black funnel), the white nose of Crown Princess, and the Hythe pier train in the foreground - Oriana is unseen in the distance. Cruise ships usually leave port in the late afternoon/early evening and I'll be out there on my balcony waving them off and hoping to hear a blast from their whistles as they pull away. QM2 is bound for New York, Oriana for Zeebrugge and Crown Princess for Scotland. It's such a beautiful day and Southampton Water looks very glamorous in the sunshine.
Posted by susan vale at 16:24 No comments:

The July issue of Vogue thumped onto my doormat this morning, so the early part of my evening is decided; I'll be settling into a favourite armchair with my new magazine on my lap and a glass of champagne in my hand. I love Vogue and I love a glass of champagne, so this is the perfect way to spend an hour or two once a month. I'm not sure how it started, but it has become something of a ritual over the past few years and one I haven't yet tired of!
Posted by susan vale at 11:25 No comments: